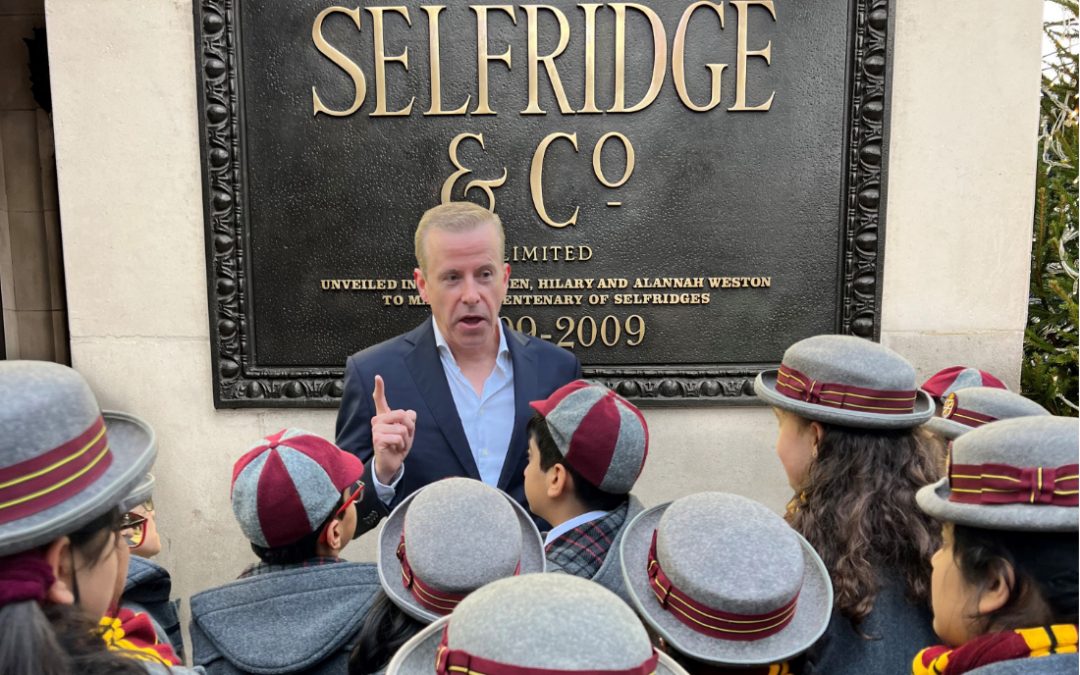 Year 6 were invited by Selfridge & Co to visit their Oxford Street store for a ‘privileged access’ VIP tour. VIP ‘personal shoppers’ are usually shown around the store before or after public opening hours, when the store is empty and officially closed to the public.

Selfridges is acknowledged as one of Britain’s oldest ‘high end’ luxury department stores, being founded by the American millionaire Harry Gordon Selfridge in 1909.  Harry, know to customers and staff alike as ‘Mr Selfridge’, pioneered the luxury department store concept in the UK, which was later copied and adopted by Harrods and a host of other similar luxury stores. His many shopping innovations would revolutionise shopping forever and provide a blueprint for the way shops are today. These included the appearance for the first time in the UK of shopping counters and glass cabinets where shoppers could see and handle the goods on sale, and the holding of two annual sales per year. Selfridges was also the first store to have a make-up and perfume department. Harry Selfridge believed that shopping should be made a pleasurable experience and that shoppers should be treated like guests in a five-star hotel – he also coined the phrase, ‘the customer is always right.’.

The store at 400 Oxford Street was built from scratch to his particular specifications; the pillared architecture was heavily influenced by the design of the White House in Washington DC. Inside the store, Selfridge decreed that it should resemble a luxury hotel, with marble floors, ornate staircases, with a Grill Room and a Palm Court that would serve lunch and afternoon tea while an orchestra serenaded the diners. It would also have a library, a Post Office, a barber’s shop, a ladies hairdressing salon, a concierge and a bureau de change. On the official opening day, 15th March 1909, a record breaking 90,000 customers filed through the doors and on to the 50,000 square feet of shop floor.

Today, over a hundred years later, the store still boasts of having over 50,000 square feet of shopping space, and it was this that Year 6 came to find out more about. Having got to school at the crack of dawn in order to arrive in Oxford Street by coach shortly before 9.00 am, the pupils were taken on a conducted tour of the building’s five storeys, three basement levels and roof garden by John Sheahan, Selfridge’s Head of International Client Development. After the tour, pupils interviewed him about the past, present and future of the store. Mr Sheahan later commented that the pupils, ‘really were incredible, and certainly their questions were some of the most interesting I’ve ever been asked.’

Here is an edited selection of the questions asked by Year 6 and John Sheahan’s answers:

When Selfridges first opened, it had a Palm Court serving lunch and afternoon tea like a 5-Star hotel. Where abouts in the building was the Palm Court and when was it closed?

The Palm Court was indeed a much-celebrated destination in its day and was located on the 4th floor of the building close to the current Selfridges Kitchen area. It was closed during the second world war following damage sustained by an incendiary device that landed on the roof of Selfridges.

Was Selfridges always a store that sold other people’s goods and services, or did it start off with its own ‘Selfridge’ label products?

Over the years Selfridges has often carried a range of items branded as Selfridges including souvenirs, books and clothing.

Since its inception Selfridges has always striven to be forward thinking and innovative in keeping with Harry Gordon Selfridge’s vision. Today we continue to celebrate that spirit and look forward to a very exciting future.

How has the trend towards on-line shopping affected Selfridges?

For many years now Selfridges.com has continued to grow in importance and we see it as a crucial part of the wide range of services available to our customers.

What do you think it is that makes Selfridges unique?

Selfridges has always been about creating a sense of excitement and wonder and being open to everyone.

Why do you think that a number of other Department Stores have failed in recent years, and why have others, like Selfridges, remained successful?

As Harry Gordon Selfridge recognised from the beginning, innovation is key to retail and you must continue to evolve and find new ways to engage with your customers.

How many shoppers visit Selfridges each year?

We have millions of visitors walking through the doors of our 4 stores in London, Birmingham and Manchester every year and millions more visiting our digital store.

What plans do Selfridges have for the future?